Airsofting for Beginners: A Guide for an Airsoft Noob

Getting into Airsoft can be exciting, but it can also be overwhelming. If you’re a totally new player, you may feel overloaded by all the new skills you need to master, as well as the cost of new gear. Thankfully, this beginner’s guide will help get you off to the right start.

If you’re excited about Airsoft, you may want to invest in equipment right away. However, you’ll get a better sense of what you should be looking for if you spend some time playing Airsoft before you make a big investment.

Many fields offer rental equipment, which will allow you to get some hands-on experience with different types of gear. After a few airsoft games, it’s likely that you’ll have a better idea of what you should and shouldn’t buy. 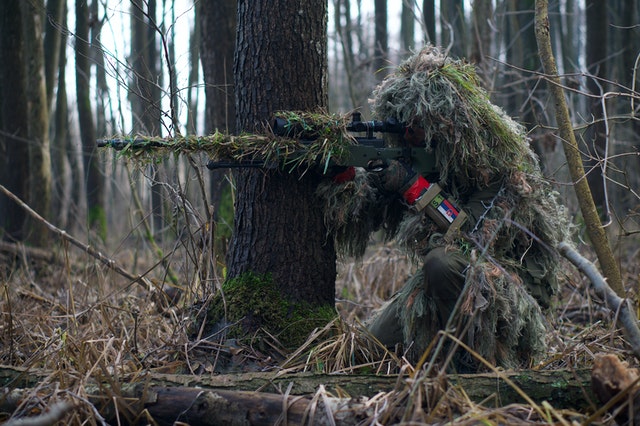 It’s important to have the right gear when airsofting, and one of the most important things you can purchase is a good pair of shoes. You’ll be doing a lot of running during the average game, which is why you’ll want to make sure your feet have the support that you need.

If you buy new shoes to play in, you’ll want to take the time to break them in before your next game. Otherwise, you could wind up with blisters or even an injury. Since airsoft games are often played on uneven terrain, you’re going to need shoes that you can depend on.

You’ll need to make sure that your hands are in good shape while you’re  irsofting. If your hands are injured, or if you can’t get a good grip on your airsoft rifle, you’re going to encounter problems. A pair of rubber gloves is the perfect foundation for any airsoft player.

You’ll want to choose gloves that will completely cover your fingers and your wrists. If any part of your hand is exposed, you’re putting yourself at risk for injury. You should focus on finding gloves that will give you plenty of protection without restricting movement in your hands. Read reviews so that you can find some of the best airsoft gloves on the market.

Make Sure Your Face Is Properly Protected

Injury is a risk during airsoft games, but you’ll be able to reduce that risk if you take steps to protect yourself. When purchasing googles, you’ll want to look for options that are ANSI rated. Ideally, you should try to find goggles that are fully sealed.

You may want to consider wearing a full face mask so that you have more extensive protection. Having your mouth protected could keep you from losing a tooth. The best-reviewed sets on the market are lightweight, breathable, and designed for Airsoft, which means you’ll be able to wear them without any issues.

Be Aware Of Engagement Distance Rules

If you know what the rules are, you’ll be able to make sure you follow them as you play, which can keep you from getting banned from the field. Knowing the rules also means you’ll know whether your opponents will be able to fire at you.

What would you do if your weapon jammed or malfunctioned on the field? If you don’t have a backup weapon with you, you could wind up in a rough situation. That’s why it’s smart to have a primary rifle as well as a backup.

While some players carry an airsoft rifle and a pistol, you may find that two rifles give you a stronger advantage. There’s no way to completely prevent malfunction, but you can make sure that you’re fully prepared for a scenario like this if it occurs.

Work on Your Fitness

If you’re not in great shape, now is the perfect time work improve your fitness levels. In order to succeed at Airsoft, you’ll want to work on improving your endurance levels. Cardio exercise is an excellent way to do this. If you exercise regularly, you’ll be able to push yourself harder, giving you an advantage over your opponents.

You’ll also want to work to build core strength. Squats are also an exercise you’ll want to incorporate into your usual routine. Squats can strengthen all the muscles in your legs, allowing you to stay in a crouch position and to sprint rapidly when you need to.

A lack of trigger discipline is a common problem for new airsoft players. Unfortunately, this can lead to accidental discharges. When you keep your finger against the trigger of your weapon, it’s possible that you could squeeze it accidentally, which could impact your game or even lead to an injury.

You’ll want to make sure that you’re able to reach the trigger quickly, but you’ll still want to keep your finger off the trigger until you’re ready to fire. Practice trigger finger discipline so that you’ll be able to use your replica more effectively.

In addition to improving your trigger discipline, you’ll want to work on your grip. It’s common for new players to extend their elbows when they’re holding their weapons. This can put more strain on your shoulders, which can lead to injury and can also cause you to feel tired more quickly.

Instead, you’ll want to keep your elbows straight and pointed downward. This will improve your accuracy and stability, and it will also give you a leaner profile on the field. You’ll be less noticeable when you’re standing behind cover, and you’ll be placing less stress on the muscles in your shoulder. Pay attention to the way you’re holding your replica and make adjustments as needed.

Make Sure You’re Familiar With The Field

You’ll have a tactical advantage if you’re placing on a field that you’re familiar with. You’ll know the best spots to take cover, and you’ll be aware of points you need to watch out for. If you always play on the same field, you’ll gradually become more familiar with it over time. However, if you’re going to be playing on a new field, it’s smart to do a little advance research.

If possible, you’ll want to visit the field in person so that you can get a better idea of what to expect. If that isn’t an option, you should check to see if there’s a map or video footage you can view online. The more you know about the terrain you’re planing on, the easier it will be to develop a solid strategy.

Stay Low To The Ground

When you picture an airsoft game, you may not imagine yourself lying prone on the ground. However, being low to the ground makes you a more difficult target to hit. It can also keep you out of the field of vision of your opponents, allowing you to sneak up on them as needed.

If you remain low to the ground and move slowly, your opponents won’t notice you until it’s too late. Even if you are spotted, you’ll be a difficult target. While you should play in numerous positions during an extended airsoft game, being low to the ground will usually give you a strong advantage.

Get Better At Using Cover

If you stay about an arm’s length back from the cover that you’re under, you’ll be able to keep your replica up and shoot at any target that enters your field of vision. If you’re too close to your cover, you’ll need to keep your rifle down, which means you may not have enough time to fire at your opponents.

Unload Your Replica In Between Games

You may think that it makes sense to keep unused BBs in the magazine until your next game. After all, this will save you the time of loading and unloading your weapon. In reality, however, failing to unload your magazines could cause the spring in your weapon to deteriorate.

An airsoft rifle can be a big investment, which is why you’ll want to do everything you can to increase replica longevity. Always empty any leftover mags back in the bottle. It may take a little extra time, but it could boost the lifespan of your replica by years or more.

If you avoid beginner’s mistakes, you’ll have a much smoother entry into the world of airsofting. It’s important to remember that every airsoft player is a beginner at first. Keep this advice in mind, and you’ll be able to get off to a strong start.